Simulation of the geogenic particle contribution to the overall aerosol pollution in Greater Beijing, China 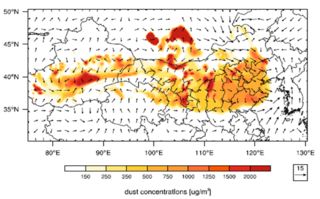 Beijing belongs to the biggest mega cities in the world and it is still growing due to ongoing population growth, urbanization and industrialization. Therefore Beijing faces huge environmental problems, especially in terms of air pollution. The strongest influences have small airborne particles from different anthropogenic and natural sources. Sand and dust storms frequently occur in spring in Northern China and lead to high particle loadings in the air not only in the desert areas itself but also in the densely populated areas in Eastern China. In the urbanized areas the natural geogenic particles mix with anthropogenic particles and lead to a severe reduction of air quality, harm the human health and influence the state of the atmosphere by altering radiative processes and cloud formation. Still a lack of information exists about the impact of the geogenic particles on the urban atmosphere and aerosol pollution of the Eastern Chinese mega cities.
To investigate the contribution of geogenic particles on the urban aerosol loading in Beijing and their impact on chemical and physical properties of the atmosphere the comprehensive model system COSMO-ART has been set up for Northern China. COSMO-ART consists of the meteorological weather forecast model COSMO of the German Weather Service (DWD) and ART for the treatment of aerosols and reactive trace gases developed by KIT/IMK. The model domain covers whole Northern China which allows the investigation of the influence of mineral dust from all Chinese deserts to the Beijing aerosol loading. These model results are compared to PM2.5 data measured in Beijing by KIT and lidar remote sensing data from the CALIPSO satellite launched by NASA in 2006.
COSMO-ART is applied for different case studies from 2006 to 2011. In the first model runs the mineral dust and anthropogenic particles are calculated separately to estimate the particle fluxes and the contribution of both particle types on the state of the atmosphere. In the following model runs geogenic and anthropogenic particles are calculated within one simulation to quantify the level of both particle types to the overall aerosol loading and their combined effects on the urban atmosphere.