Hydrological extreme events can be recorded in geological archives such as speleothems in terms of specific trace element patterns and stable isotope ratios, as well as in historical archives based on written records. My PhD is carried out in the framework of the project CheckExtrema which aims at combining both archive types in order to cross-validate their information and to identify extreme events in the past. Together with environmental physicists from Heidelberg University and my working group at KIT, I investigate stalagmite laminae of Stal-KTC-2 (Kleine Teufels Cave) from the Franconian Alb with high resolution methods, while historians investigate administrative records in the city archive of Nuremberg, to identify hydrological extreme events over the last 600 years.

Stal-KTC-2 was dated using Uranium/Thorium series and radiocarbon dating. A first stable isotope analysis of oxygen and carbon was performed after micromilling with a spatial resolution of 90 µm (period of 4-13 years) using an Isotope Ratio Mass Spectrometer (IR-MS). A second, annually resolved stable isotope analysis was carried out using an ion microprobe with an analytical resolution of 7-15 µm. The distribution of multiple trace elements was determined with laser ablation and mass spectrometry (LA-ICP-MS) at a spatial resolution of 6 µm.

For a reliable interpretation of the geochemical proxy records from speleothems, the processes controlling their formation need to be understood. Therefore, we set up a detailed cave monitoring program in Kleine Teufels Cave and the nearby Zoolithen Cave with monitoring of cave air (T, rel. humidity and pCO2) and high-resolution drip- and rainwater sampling with up to weekly sampling intervals by the local cave club or up to hourly resolution using autosampler systems. 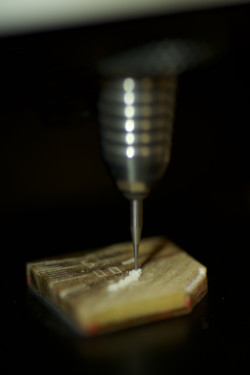 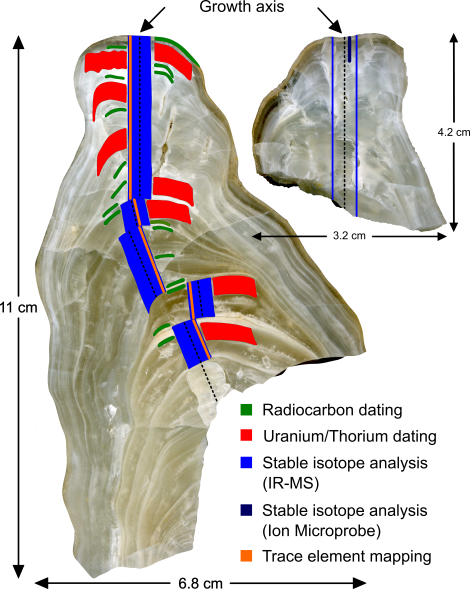 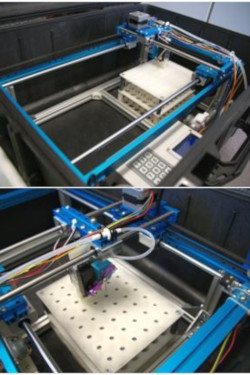